Last night we turned off the air conditioners and opened the windows to enjoy some summer thundershowers that moved through the area and cooled off the temperatures. This morning we awoke to cool (58 degree) weather and light fog as we were preparing to leave. We were on the road around 8:30 am and headed north on I-81.

As promised yesterday, today’s stop is rather special for Malcolm. In July of 1975, Malcolm’s grandparents took he and his brother on a trip through the northeast United States, stopping here at Drummer Boy Campground for a visit to Gettysburg, Hershey and Harrisburg, Pennsylvania.

When we were going through things at our house before starting our full-time RV adventure, Malcolm ran across a postcard he had sent from Gettysburg to his parents. His Mother had kept it along with other letters and postcards. Malcolm decided since we were going to be in the general area, it would be fun to stay here again for old times’ sake. 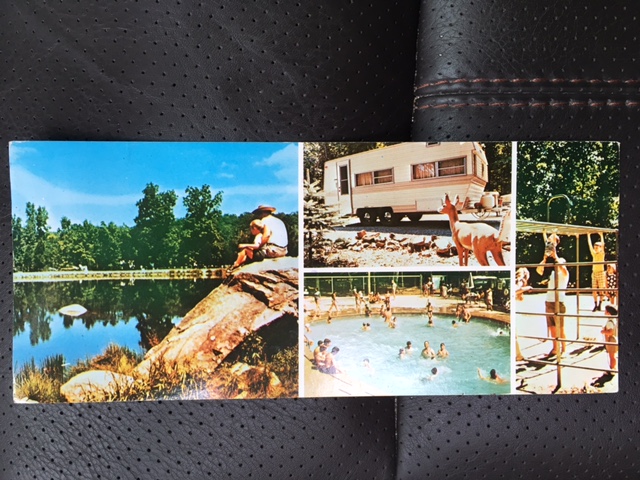 We got set up here around 3:30 after driving all the way to the back of the campground (where the big rigs park). The campground is really large. We drove through most of it just looking around after we got the trailer set up. We picked up a t-shirt for our quilt, but found they didn’t have any postcards for the campground.

A couple of milestones achieved today. We passed the 70,000 travel miles mark as we entered Pennsylvania. Also, Pennsylvania is the 37th state we’ve stayed in since we started full-time travel.

Tomorrow we’ll be visiting the various sites in the Gettysburg area.