Today was purely a travel day. Since traveling from Dayton, Ohio to the Chicago area would be a long drive, we decided to break it up and stay about halfway along the path. We ended up near Champaign, Illinois.

We had gotten a decently early start, had a somewhat short travel day (266 miles) and crossed back into the central time zone. We ended up arriving at the park about 12:30 pm. Since we had all afternoon, Malcolm called the local Ford dealer and was told to bring the truck on down for an oil change. We were just shy of the 30,000 mile mark, so it was due.

With the oil changed and the air and fuel filters changed, we were on our way. We stopped by Target and Gander Mtn. to pick up some camping items and other shopping we needed to take care of. We also stopped by Culver’s and picked up a snack to tide us over until dinner. Finally, we stopped by and filled up the truck with fuel near the campground. 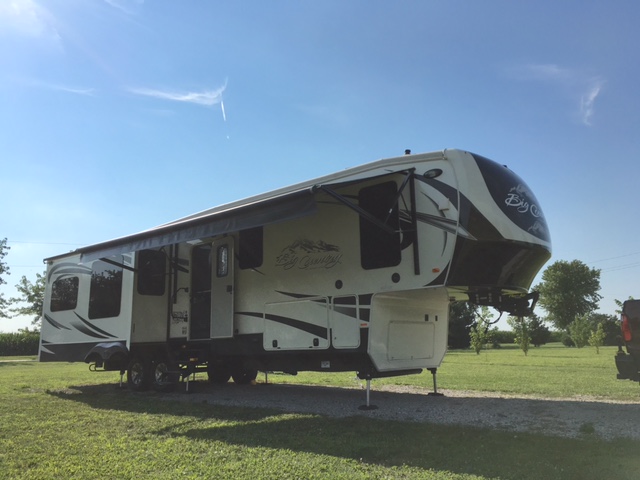 Dinner was leftovers in the trailer. Malcolm took care of a couple small maintenance items that popped up over the last couple days’ travel.

Tomorrow we head up to the Chicago area to visit with Malcolm’s friend and high school classmate John Boehm and his family. We’re still undecided on sightseeing in the area, though we do have two nights booked at the campground, though it is more than an hour’s drive (closer to two hours) out from town.