We packed up this morning and headed out from Buffalo, Wyoming towards Montana. Fresh from last night’s reservation-making, we were confident that we’d be staying in the Grant County, Washington fairgrounds campground on Saturday evening. Still, just to be safe, we decided to call the fairgrounds to make sure.

That’s when we found it pays to be flexible again. When Malcolm called the fairgrounds office, they indicated that they don’t open the campground unless their is some type of event going on and there isn’t right now. They did suggest a nearby city-run campground, instead, so Malcolm called them up.

The first person that answered the phone said that she was pretty confident we wouldn’t have any problem getting a site, but that there is a two-night minimum. Malcolm told her that we would call around to make sure we could re-arrange some reservations. We decided that we would travel on to Deer Lodge today instead of stopping in Livingston. Deer Lodge said that we could come on in today instead of tomorrow.

We couldn’t drop the Livingston reservation without losing all of our $50 deposit, though. However, we could change the reservation to a later date, so we changed it to coincide with our trip back east in early September.

With all that coordinated, Malcolm called the first campground back again. Another person answered and he wasn’t sure if they could accommodate a rig our size, but he was going to call the camp host at the campground to see what they could do. We drove on down the road while waiting for a callback. Once he called back, he said he could put us in an overflow area where could at least get electricity. Then he asked when we planned on arriving. This is where we should have asked up front. They are completely booked over the weekend, including the overflow area.

On our next stop, Malcolm just started calling around to campgrounds up and down I-90 between Deer Lodge, Montana and the eastern third of Washington state. He finally found a site for Saturday night at a little campground in the middle of Idaho and reserved that. Once we got to Deer Lodge, we found that we could stay two nights here, so that covers us through the weekend. Phew.

After all that phone calling and planning, we’re glad that we’ve finally got all the bases covered all the way through and including Labor Day weekend. After that weekend things get a lot easier to book, so we are more confident we’ll have a place to stay all the way back east. Such is the life of a full-time RV’er.

At any rate, here we are at the Deer Lodge KOA. We stayed here back in 2013 heading west with our son riding along with us. Though it is a small park in the middle of town, it is nice and quiet. The owner was very accommodating to all our changes. 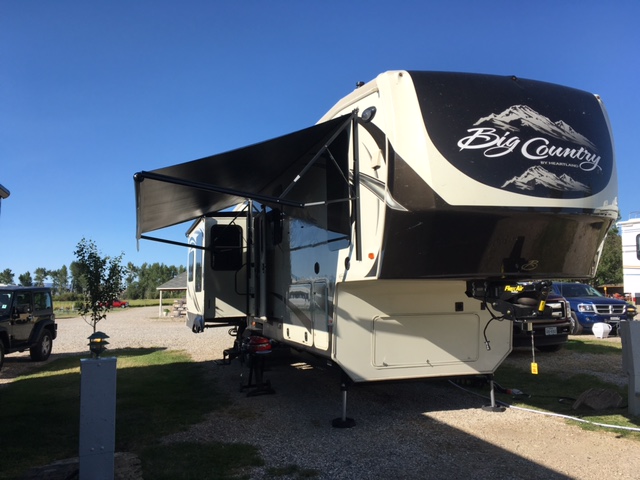 Some Montana Big Sky in the background

Tomorrow we’ll be running various errands around town in preparation for our week and a half camping with the family at Lake Chelan, Washington.