We’re back in Alabama, but let’s look back a few days to when we were still in Panama City. Last Sunday, we went to church in Panama City then had lunch out. We spent the rest of the day relaxing.

On Monday and Tuesday, Malcolm had to work. He was originally supposed to be off during the week, but they had customer testing going on and Malcolm volunteered to get online and watch. Since he is hourly, we got extra income from that, so we’re not complaining too much. 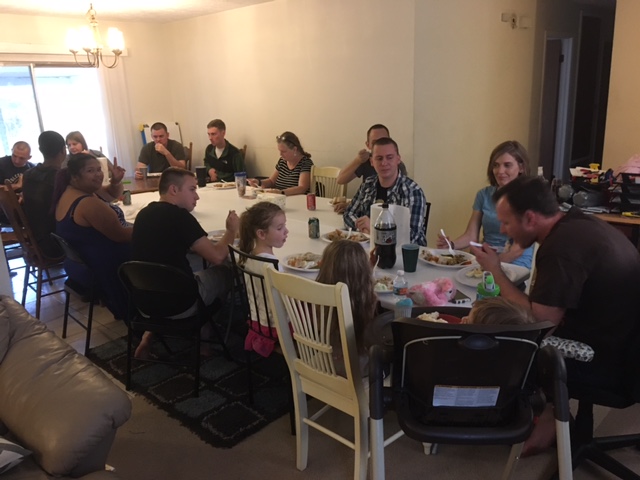 After dinner, many of us played games. It was a great time and there was plenty of food, as usual. On Friday, we headed over to David’s house in the afternoon for more games. We bought pizza for the guys and brought some soft drinks to share. We said our goodbyes before it got too late, as we needed to finish packing up the trailer to leave.

Saturday morning, we packed up and drove back to Wetumpka. We set up the trailer in the site next to the one we usually get since it had someone in it already. We like this site just as well, so no problem. The trailer will remain here now until the first week of January when we head down to Florida.

Saturday afternoon, after setting up and getting some lunch in our stomachs, we headed to Montgomery to do a little shopping, then back to our storage unit to get out the Christmas items and our winter coats. Saturday night’s forecast low was 32 degrees. Brr.

The Christmas Tree all set up.

Today we headed to church. We both sang in the choir during the service. Afterwards, we picked up mail and packages from our friends, the Miltons and ate dinner out. Once back at the trailer, we changed clothes and drove out to get the car washed and pick up some items at the grocery. The regulars at the campground here wanted to do a post-Thanksgiving pitch-in dinner this evening, so Val agreed to bring dessert.

While Val cooked desserts, Malcolm took the truck to the car wash and cleaned it up (both vehicles were covered with dust from the drought conditions down here, as well as pine sap from the campground in Panama City Beach). He also took a bunch of totes back to the storage unit to get them out of the way.

This evening, we shared our post-Thanksgiving meal with the folks here at the campground. We’re so blessed to have a great group of people that we can trust to watch our stuff when we are away. We truly have a nice bunch of neighbors here. I guess that’s why we end up here quite a bit when we’re not traveling.

It’s back to work for Malcolm (at the trailer) the next few weeks. The only planned trip before Christmas is a weekend trip up to Nashville for Malcolm’s company’s Christmas party. We’ll leave the truck and trailer here and drive the car up. Malcolm’s already gotten hotel reservations lined up.