We’ve had a fun time at the 2017 North American Heartland Owners Club rally. This evening, after the group meal, we walked around and said our goodbyes to our neighbors.

Over the past week and a half, we’ve gone shopping in Shipshewana (more than once), wandered around downtown Goshen, had dinner out a few times with friends and, of course, enjoyed the various rally activities.

Val taught her crochet course again this year (she taught one back in 2015 when we were here last). Malcolm attended a couple of the seminars on various RV components and systems. One of the seminars was on a nice waterless cleaning system for the RV and truck. Malcolm bought one of the kits and has shined up both the trailer and truck this week. It will be great for those times when the rig is dirty and we can’t clean it in the campground. 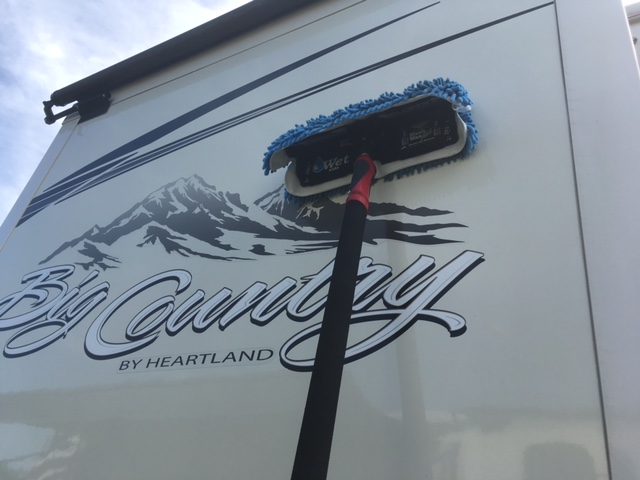 Cleaning and Waxing the Trailer 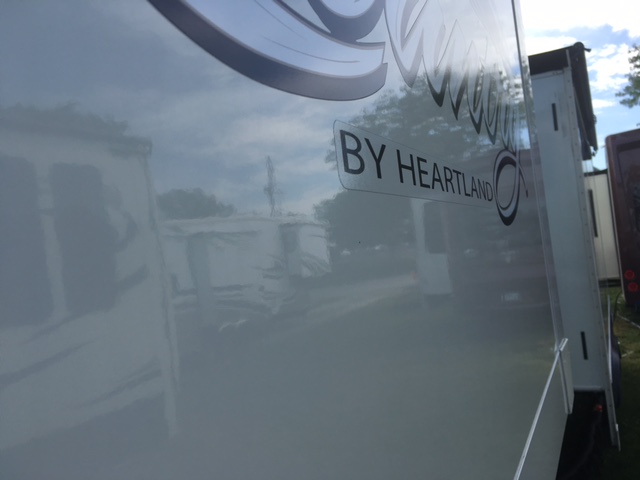 Speaking of cleaning – one service we did sign up for was having the trailer’s carpets cleaned. Since our trailer was a demo unit at the dealer for several months before we purchased it, the carpet in the living room has always had a few spots in it from people walking through the rig. We were very pleased that the carpet cleaner got all the spots out. Our carpet looks almost new. 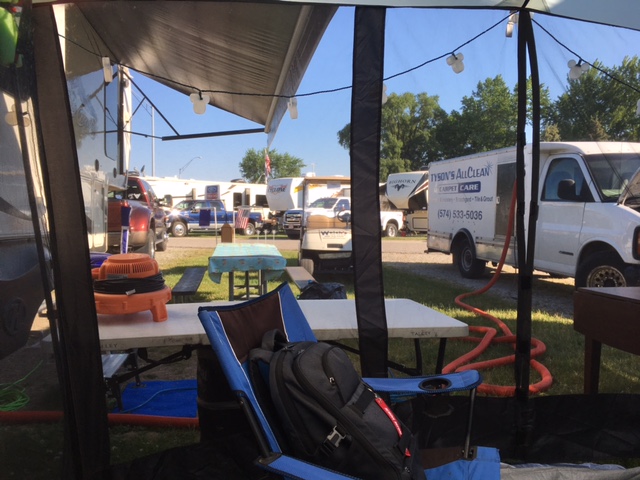 Relaxing in the screen room while the carpet is cleaned

One day we went to Goodwill and Val found a sewing cabinet like the one Malcolm’s mother had for years. We had given that cabinet to our daughter years ago and Val has always wanted another ever since. The cabinet also had an older Singer sewing machine in it of unknown quality. However, we’re good on sewing machines, so we took it out and took it back to the Goodwill to donate it again along with one of our two desks from the rig. The sewing cabinet now sits where Val’s desk was in the back of the trailer. 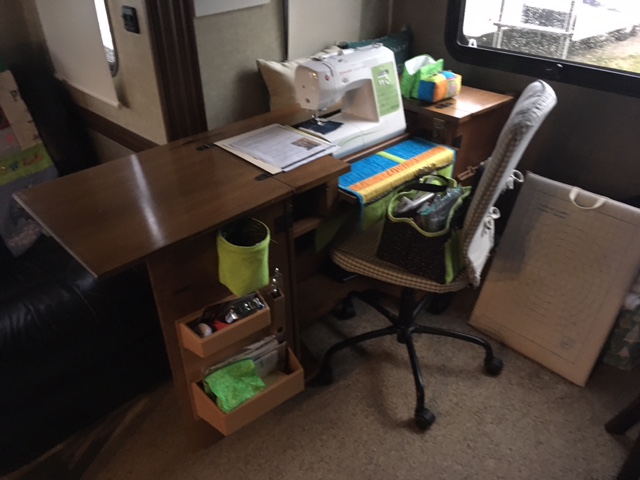 The sewing cabinet closes up small enough to fit in the back corner of the trailer so that the slides can come in. We put new caster wheels on it and have some rubber cups to put under the wheels to keep it from rolling around while in transit. 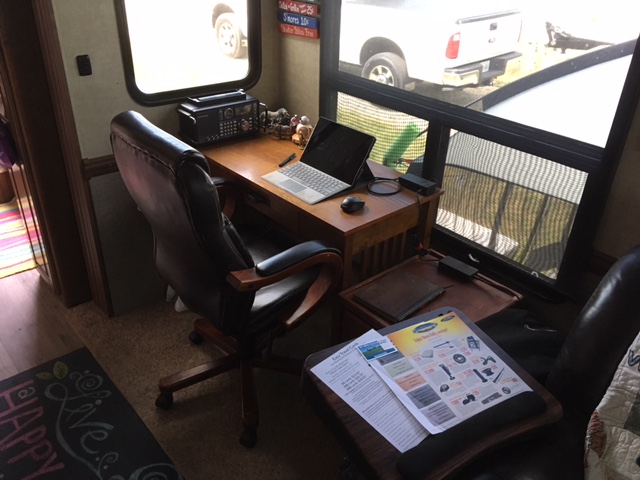 Another nice benefit when you attend the national rally is that the manufacturer – Heartland – offers to fix two non-major items on your trailer, regardless of warranty coverage. We had our slideout adjusted to sit more flush when retracted. We also had the screw trim cover vinyl strip on the same slideout replaced since the original has had a hole in it for quite some time. 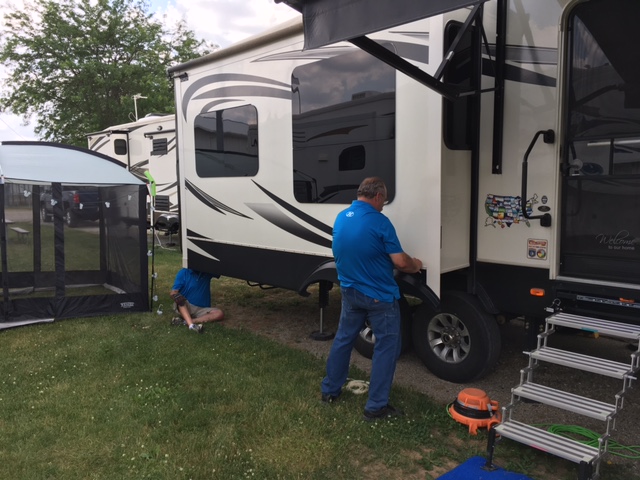 Getting our free repairs done

Today (Saturday) was the last official day of the rally (most everyone will be leaving tomorrow morning). It started off with tours of the manufacturing plant where our trailer was made. Malcolm has done the plant tours twice before, but it was the first time that Val got to do the tour (previously, she had gone on a design center tour). 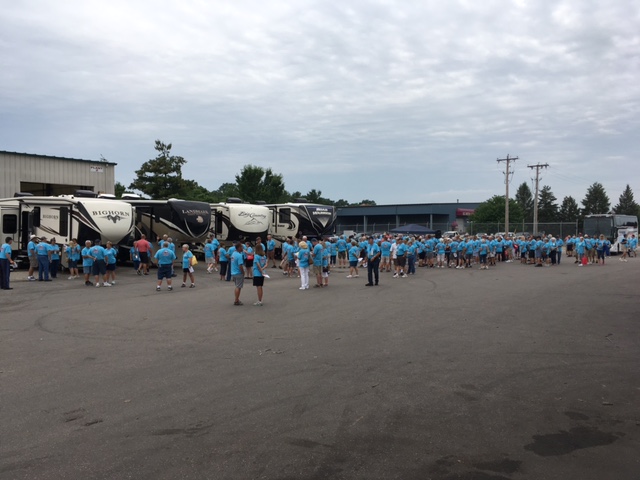 Everyone gathering for the plant tour (in their blue rally shirts)

We got to see rigs in various stages of construction. None of them were our particular model this time (Malcolm got to see some of our previous trailer’s model being built back in 2015). 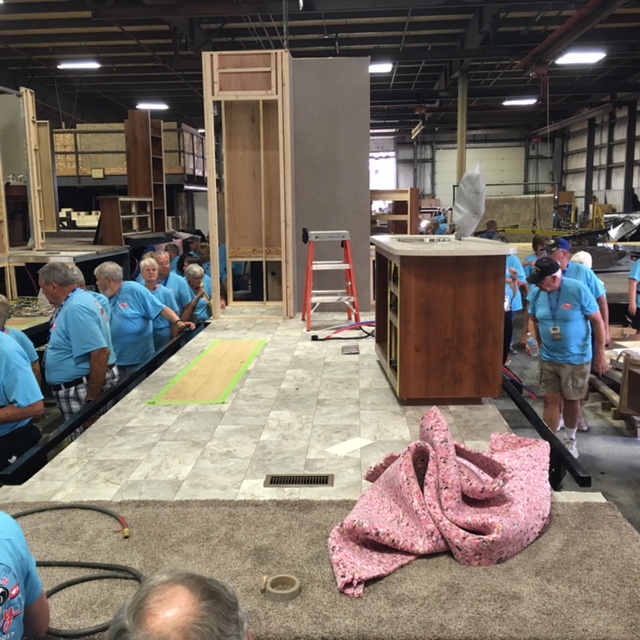 A Trailer in Progress 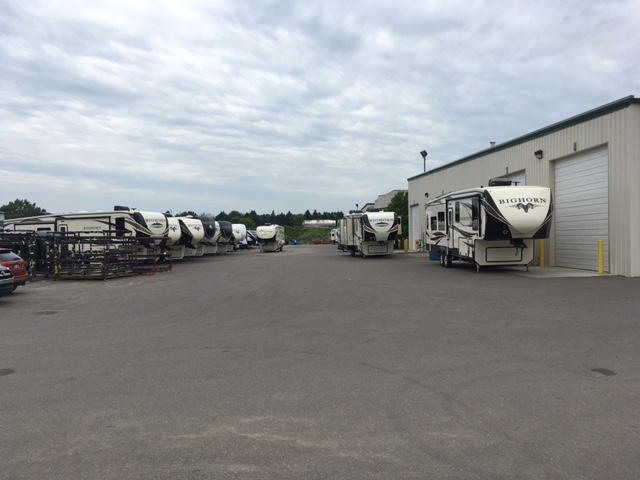 Finished Trailers Outside the Plant

After the plant tour, everyone went over to the RV and Motorhome Museum and the Furrion Design Center. We just did the latter, since we’ve been through the museum twice before. Furrion builds various RV components, including a really nice gas range and oven. 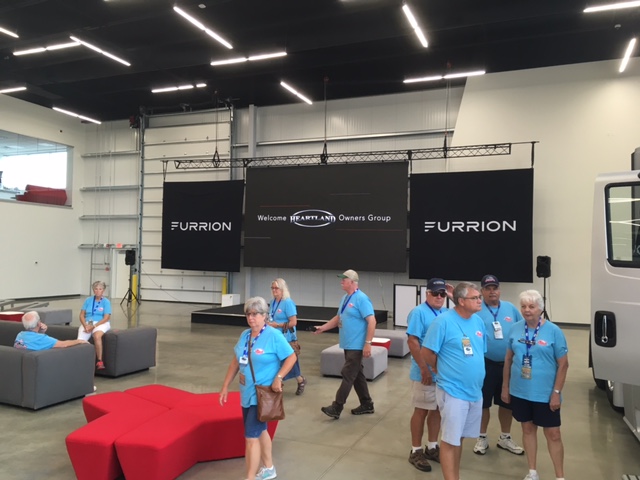 At the Furrion Design Center

Skipping the museum gave us an early start back towards Goshen. We made a final stop in Shipshewana to pick up a couple items at Yoder’s Department Store, then had lunch at the 5 & 20 Restaurant. Back at the campground, Malcolm “washed” the truck with his new kit and we started packing up and breaking down everything in preparation for leaving tomorrow.