We hooked up this morning and hit the road a little after 8:00 AM. We drove on up I-75 and decided to stay on I-75 north through Atlanta. Traffic was a bit heavy, but not unbearable. We made it through just fine.

We stopped for lunch at a truck stop near Dalton, Georgia. We backed into a site along the back and ate lunch in the truck, watching the trucks drive by to go to the fuel pumps. When we were done eating, we noticed a couple trucks in front of us and not really moving. We had debated filling up our truck there after lunch.

Malcolm ran back to the trailer to throw away our trash and use the restroom before closing up the trailer. The truck that had been stopped in front of us for a while looked like it was going to back into another space on down from us. Malcolm could see a lot of smoke rising from the area of the fuel pumps, but figured it was an older truck spewing a lot of exhaust.

It turned out that a truck in line for fuel had caught fire. A fire truck was already there hosing it down, but we decided to turn out the way we came in and get fuel elsewhere. Various other fire vehicles were arriving as we were leaving and they were blocking the entrance for any more trucks to come in. Lots of excitement. We just got back on the interstate and stopped for fuel on up the road. 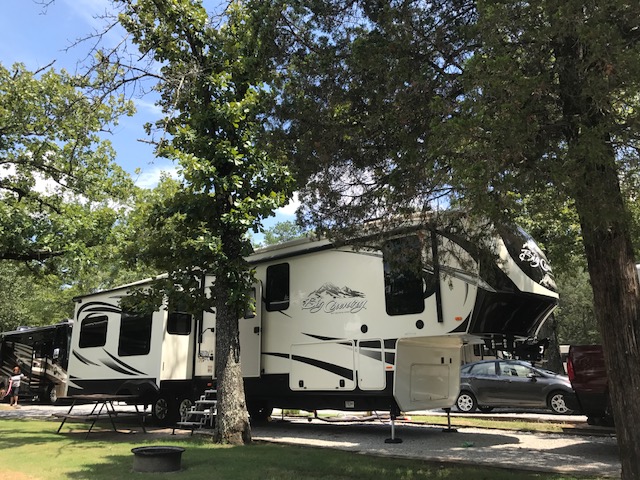 We arrived here about 3:00 this afternoon and got all set up. Though the actual campground is in Rossville, Georgia, we are in the general Chattanooga, Tennessee area (literally 1/2 mile south of the Georgia/Tennessee border).

While the air conditioners were doing their thing cooling down the trailer, we drove across the interstate to Camping World and picked up a few things we needed. We bought a pair of LED lamps to replace the ones in the dining room fixture and found out they were too dim, different sizes and even different colors though they were both packaged as the same bulb. Malcolm drove back over and returned them. We’ll order the correct bulb(s) off Amazon later.

We ate dinner in the trailer and generally just relaxed. Tomorrow we head on up to Lexington, Kentucky to stay at the Kentucky Horse Park for eight days.