We moved the trailer from the Washington State Fairgrounds to the Gig Harbor RV Resort on Friday, August 25th. Since it was only about a 40 minute drive and the Gig Harbor RV Resort had a 1:00 check-in, we took our time at the fairgrounds getting ready. As a matter of fact, Val drove over and picked up Violet to let her go buy a birthday present for Scarlet, since her birthday party was later in the day.

We called ahead just after 11:00 to Gig Harbor and they said come on over any time after about noon, so we hooked up and pulled out of the fairgrounds around 11:30. It is a 24 mile drive over to Gig Harbor and we arrived just after noon and got the trailer all set up. We did some grocery shopping and later in the day went over to Fox Island to visit the family for a bit.

All set up in Gig Harbor

We spent Saturday and Sunday over at Fox Island with the family, as well. 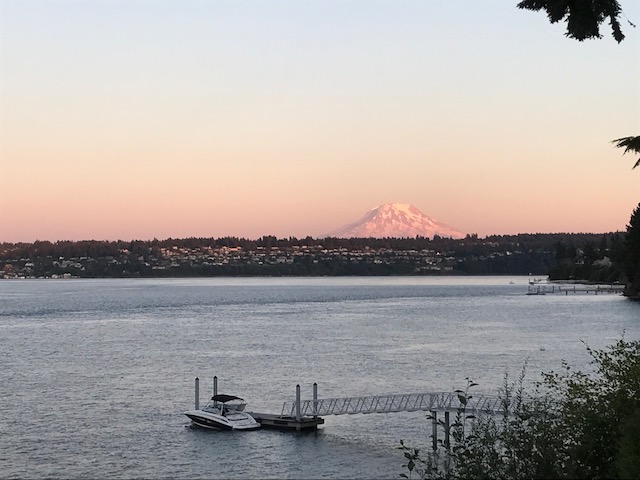 Sun setting on Mt. Rainier as viewed from Fox Island

Malcolm worked all week the following week, though two or three work days were over at Elizabeth and Cole’s house. It is a bit longer drive from Gig Harbor to their house than it is from the fairgrounds, so we would typically just pack everything up and head over for the day. Malcolm worked back in the bedroom so he could have some quiet.

Monday the 28th was Elizabeth’s birthday. We celebrated by going to dinner with Cole, Elizabeth, the girls and Val’s sister Anne and her son Jonathan at The Old Spaghetti Factory in Tacoma.

On Tuesday, the girls decorated some cupcakes for us.

On Wednesday, the 30th, Elizabeth and the girls met us at a nearby restaurant. Val took the girls and Cole’s grandmother and mother for a lunch out. Meanwhile, Malcolm and Elizabeth drove up the road a few miles and had their 3rd annual daddy-daughter birthday horseback ride.

We spent the day on Thursday and Friday over at Cole and Elizabeth’s. Some days were more tiring than others, apparently. 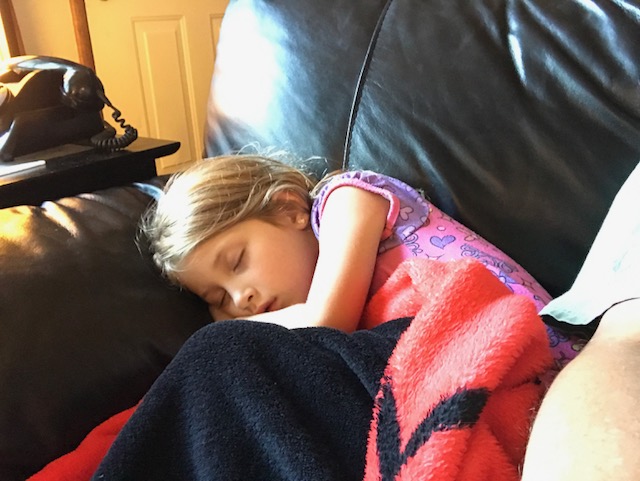 For the Labor Day weekend, we again spent the weekend out on Fox Island with the family. We celebrated Malcolm’s birthday a day early, on Saturday, since some of the family wouldn’t be there on his actual birthday.

Violet and Pa relaxing with Lulu

Violet and Scarlet came home with us from the island and slept over with Nana on Saturday night. Pa slept in his recliner. Sunday morning was spent playing with Nana’s Build-a-Bears before loading up and heading back out to Fox Island.

On Monday afternoon, we said our goodbyes to all of the family, including Cole, Elizabeth and the girls. They were heading back home a little early so that Violet would be ready for her first day of school on Tuesday. We headed back to the trailer so that we could start packing up everything for our Tuesday morning departure.

Saying goodbye to Fox Island until next summer

This morning, September 5th, we hitched up the trailer to head out on our first day of eastward travel back towards home. We were greeted with a fairly heavy smoky haze and a light dusting of ashes on the back of the truck. We rolled out around 9:00 AM, heading toward Spokane.

Ashes on the truck from Washington forest fires