The last 11 days have mostly been just normal days around home. We tackled a couple more projects over this period. The first was to build a ramp in front of the white shed so that our golf cart (when it gets here) can more easily drive in and out of the shed. This replaces a couple of stacked 2×8 boards that were used as temporary ramps when needed. 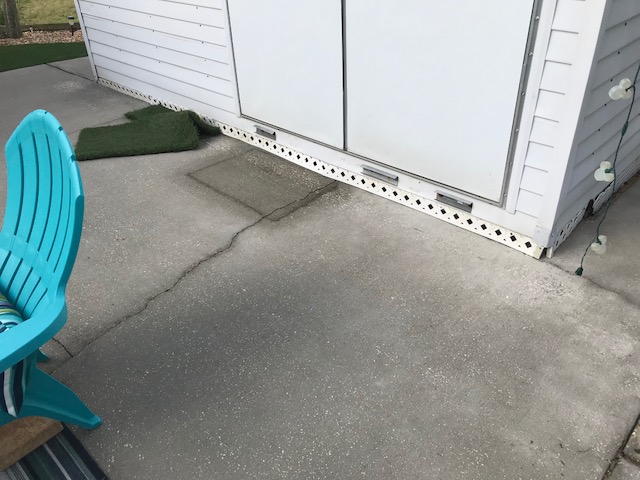 The shed before ramp 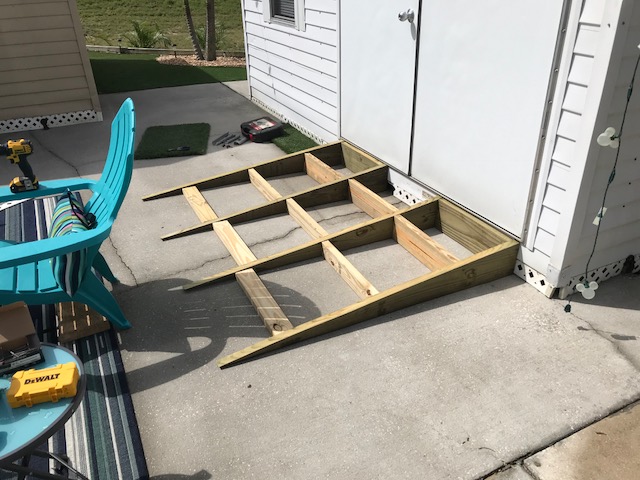 After the frame was complete, Malcolm covered it with 5/4″ deck boards.

Another project was to install something to string our lights between the corners of the sheds and a central location. Malcolm used a post mounting spike that you drive in the ground and clamped down an eight foot tall 4×4 post in it. A large cup hook in the top of the post allowed us to string lights between the post and the corners of the sheds. This makes for a nicely lit seating area at night.

We also put our Mickey projector light out in the landscaping, pointed towards the trailer. Here is a picture of us (well, Val) outside enjoying the seating area along with a warm fire from the propane fire pit.

Another project Malcolm tackled was to remove four large pods from our tall palm tree. They were dropping all kinds of palm fruit on the ground. Our local rabbit population found the dropped fruit very tasty. Every morning, we were cleaning up mostly-eaten fruit (they are mostly pit with just a coating of fruit) and tons of rabbit pellets. Here’s the tree before surgery (no “after” picture was taken). 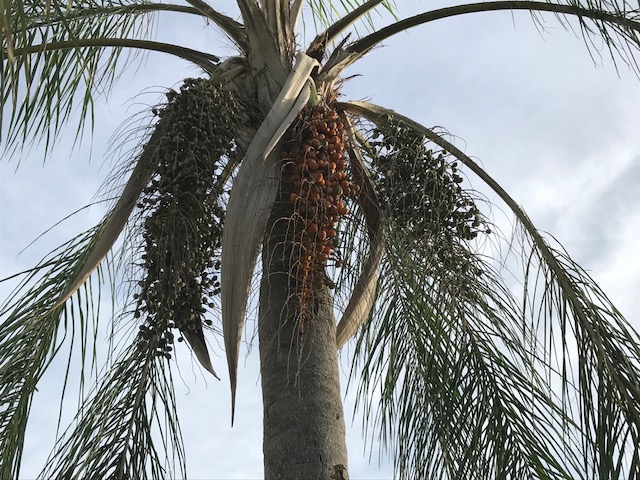 Other than those and a few other little items around the place, we’ve been doing the usual – Malcolm has been working and Val has been working on sewing projects. We went to Disney a couple times, but mostly for short visits (still waiting on that cooler fall weather).

Today (Oct. 24th), we hitched up the trailer to head up towards Wetumpka, Alabama for Frontier Days (next week). We will be volunteering again this year (our 6th year in a row). David is coming up next week to stay with us and help out, as well.