The beginning of the week was spent in preparation for being busy the rest of the week with our volunteer duties at Frontier Days. Malcolm made sure that the RV tanks were emptied and, after having several evenings of cool weather, getting one of our propane tanks refilled.

After returning with the filled propane tank, Malcolm hooked it up to the trailer and found that the connection was leaking propane. After checking nearby at Lowe’s to see if they had anything (not really), Malcolm ordered a replacement on Amazon for next day delivery and fixed it on Wednesday after the piece arrived. 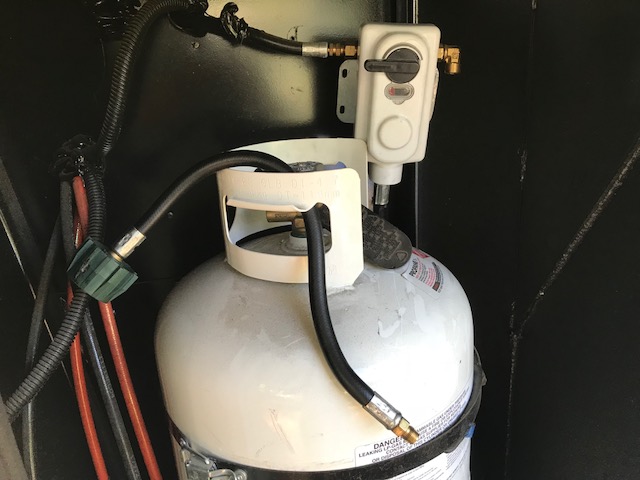 Waiting for the new hose to arrive.

On Wednesday, we all headed out to take care of our volunteer duties for Frontier Days. Malcolm and David directed traffic and parked cars. Val worked with herding the school buses full of children in and out.

Thursday morning, Malcolm woke up feeling fairly bad (fall allergies) and stayed in while David and Val headed out for traffic and bus duty. It probably was good that Malcolm stayed in as there were light rain showers off and on during the day. 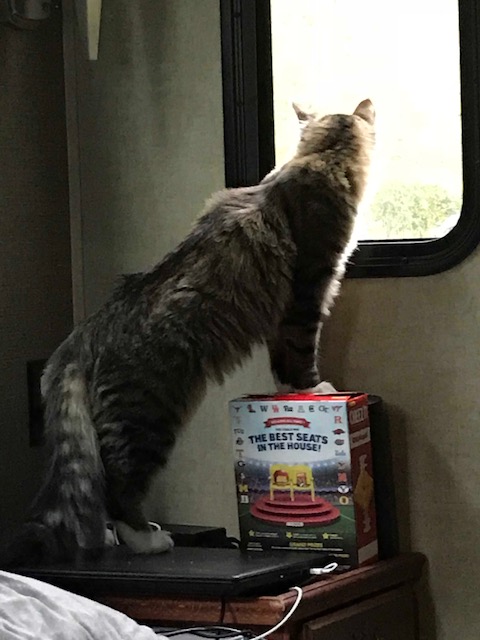 Maui watching people outside the trailer

On Friday, Malcolm was back outside working with the traffic crew. Val was back with her bus crew. This is the only picture Malcolm took at Frontier Days from his vantage point in the middle of the road. 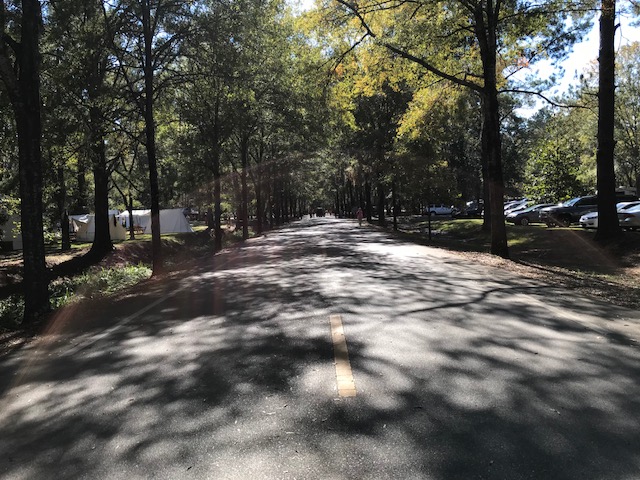 Saturday was fairly hectic, parking-wise. We have a smaller number of people working parking duties. There were no buses to take care of, so Val spent part of her time sitting in the Friends of the Fort tent and handing out information while wearing some of her new period costuming. She also took our golf cart and offered rides to people.

This morning (Sunday), we loaded up our sewer tote and took it with us to donate to some friends. We went to church and met a friend of David’s after church for lunch at Cracker Barrel. Once we were back home, we started the process of breaking everything down to travel back to Florida. David packed up his stuff, along with Maui, and headed back home this afternoon.

On Saturday, Malcolm had run out for a bit to pick up a U-Haul trailer so that we can take our golf cart with us back to Florida. Today, Val drove it around the park for a bit to get used to having a trailer behind her. After running around for a bit with the trailer empty, we loaded up the cart, strapped it down and went out again for a practice run. We also stopped by the gas station and filled up the car.

Loaded and ready to go

We realized that the golf cart really was the last thing of ours still here in Alabama, so taking it with us more or less finalizes our move away from Alabama as a sort of home base. Of course, we’ll still stop by from time to time since we still have so many friends here.

Speaking of “friends”, this week also ended up being ladybug swarming season. We’ve found a few flying around inside the trailer, but not near as many as we’ve seen in years past. We think we may have eliminated more entry points over time.

Tomorrow (Monday) morning, we’ll hitch up the trailer to the truck and, with Val following along with the car and golf cart on the U-Haul trailer, we’ll head back down towards home. It will probably be a two-day trip there.