Malcolm worked in the office every day the first week we were here and the first four days of the second week. On Friday, April 20, he decided to work from the trailer. That gave us a chance to make sure everything was ready for our trip north to Kentucky on Saturday, the 21st.

Malcolm drove the truck downtown those nine days he worked downtown. He parked in the parking garage next to the office building and the receptionist gave him vouchers to pay for his parking. Val worked on projects in the trailer those nine days and rode the shuttle from the campground to downtown Nashville once each week to have lunch with Malcolm and the crew.

One reason we came to Nashville was so that Malcolm could officially receive his plaque for 20 years of service with the company (his 20th anniversary was February 23, but we weren’t planning on coming up in the dead of winter). 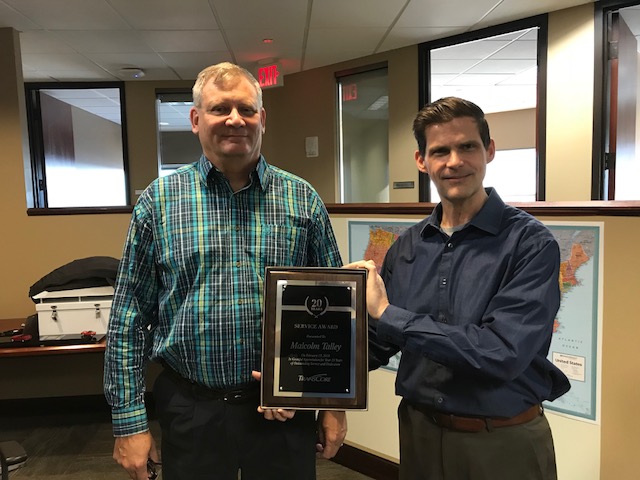 Malcolm receiving his plaque from his boss.

On Saturday and Sunday in the middle of our visit, we took care of normal shopping and also visited a few thrift shops and antique stores. We also picked up a new hotspot from AT&T. Our old one was working fine, but this one has been getting great reviews for speed and stability.

One of the neat antique stores we visited was Pre to Post Modern, which carried a lot of mid-century modern items. We didn’t buy anything, but it was fun looking at all the things they had.

On the second Monday we were there, the temperature was right around freezing in the morning. Malcolm went to get into the truck and found the windshield covered in frost. These Floridians have no ice scraper in the truck, so Malcolm just waited until the defroster melted it enough to clear with the wipers.

A couple days later the temperatures had gone back to more spring-like levels. All the blooming trees have been blooming here.

We ate at the Cock of the Walk restaurant a couple times while we were here. It is located next door to the campground, so it was an easy walk. As a matter of fact, you could see our trailer from one of the dining rooms.

There’s our house (on the left)

We packed up the trailer this morning (Saturday, the 21st) and headed up the road to Lexington, Kentucky. Stay tuned for that visit in the next installment.

One thought on “Our Time in Nashville”