We ended up staying through to Monday morning. On Sunday, we met our friends Andy and Joanna Grimes for lunch since we missed coming on over on Sunday to camp with them.

On Monday morning at 7:30 Malcolm called the local Goodyear dealer and found that they had two tires in stock that we needed for our trailer. They told us to come on over and they’d take care of us, so we packed up the trailer, hitched up and headed over. 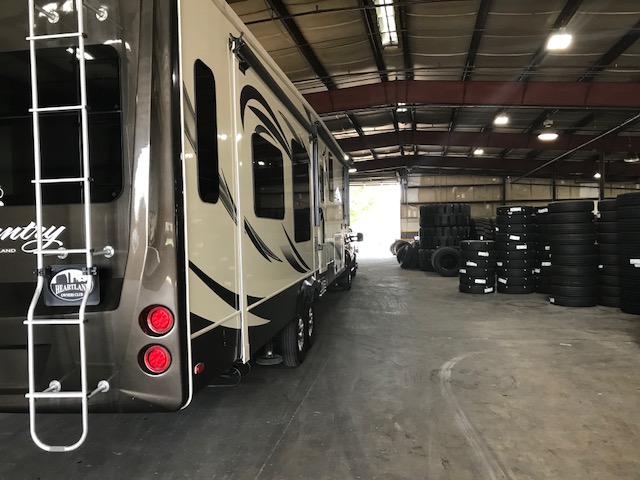 They had us in and out the door in a little over an hour, so we continued on our way north and west pretty much on schedule. The plan is to get two more tires put on in Washington to match the new Goodyears on the left side if nothing happens along the way (it didn’t).

We found this little RV park near the interstate in Tyler, Texas. Malcolm called ahead and talked to the owner who happened to be out of town at the time, but gave us instructions to check ourselves in and pay for our spot with the envelope drop. Using our Passport America card, the price was only $20 for the night.

The campground was a bit older and had lots of longer term residents, but it was kept very neat. For the sites on our circle, the campground even provided a fairly new charcoal grill and a plastic tote with charcoal and lighter fluid in it if you wanted to cook out. Nice little touch.

We stayed in this campground in Guthrie (no pictures). Their Passport America rate was $18 for the night. It was a quiet park, but rather old and decently kept. It was fine for an overnight.

This KOA is kept very neat. They serve ice cream in the evenings and offer pancake and sausage breakfast (we took advantage of both) for a reasonable cost. They’ve been filling up every night during the week as there isn’t much else close to the interstate through western Kansas.

This KOA was fairly nice, as well. We had a nice, wide concrete slab to park on. When we were rolling in, there were storm clouds over the front range of the Rockies. They eventually blew in, bringing lots of wind, but no rain.

Malcolm found a couple friends in the pasture adjacent to the side of the campground where the tent sites are. Several of the campers were enjoying our visitors.

Due to re-scheduling our stay here and then scheduling it back, we ended up with the last available site that would fit our rig – a really nice patio site. It was only $6 more than what we would have paid for the site we originally booked.

It was a little windy as we arrived here and it was blowing in cool weather. The temperature was around 70 degrees when we arrived and fairly quickly dropped into the low 60’s. Overnight, it was around 50 degrees. We ended up turning on the furnace in the morning. We also did a little antique shopping in downtown Buffalo.

When we arrived in Deer Lodge, it was around 50 degrees and drizzly rain. It stayed like that all night. We had the furnace on overnight. 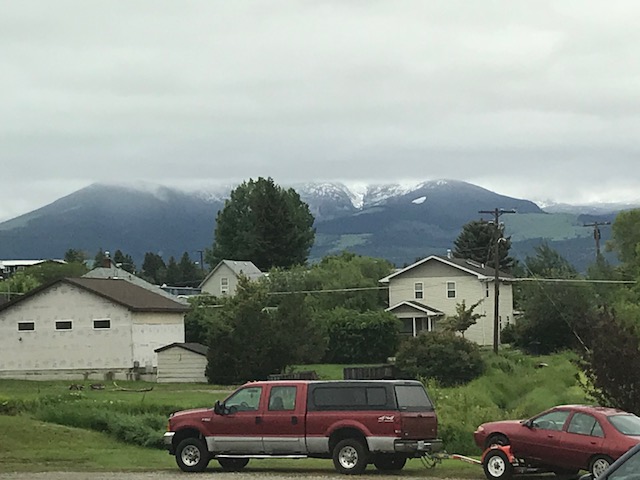 Snow on top of the nearby mountains

Deer Lodge is one of our regular stops. The owner came out and gave us a hug when we arrived. It’s not much of a park, but she keeps the place very neat and tidy.

When we arrived in Spokane, the temperature and weather had improved considerably. It was sunny and in the 70’s when we got there. 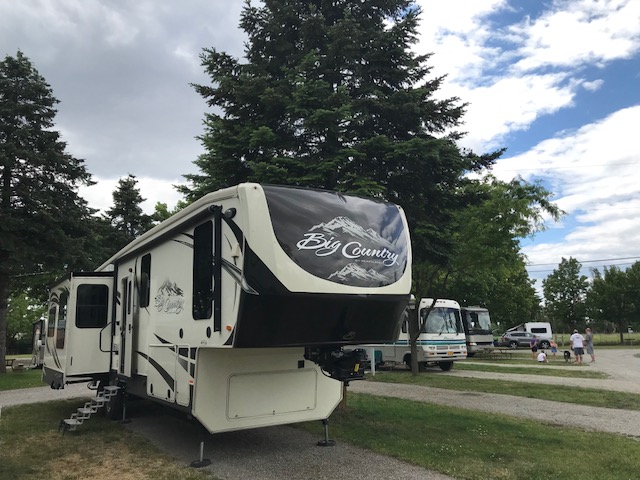 After we got there, we contacted our friends Tim and Emily Rohrer. They were in the area and agreed to meet us for dinner. In addition to Tim and Emily, Tim’s parents, Bonnie and Doug, also joined us. They recently just started full-timing and were traveling with Tim and Emily.

On Monday, we rolled into Puyallup and set up at the fairgrounds campground.

Now it’s time to visit family. We’re actually keeping the grandchildren for a couple days as Elizabeth and Cole are out of town. Elizabeth flies back in on Thursday.

The trip here from Florida was 3,435 miles. There are more direct routes than what we took, but we wanted to visit folks along the I-10 corridor, so that added a couple hundred miles or so. The following map shows the approximate route here (note the other trip earlier this year to Tennessee and Kentucky is on the same map).