On the weekdays during the two weeks we were here, Malcolm worked downtown in his office. He rode the train in every day. Some days Val dropped him off at the train station and other days he drove the truck over and left it there all day. Val worked on various sewing projects.

The weather was nice most days. It rained one morning as Malcolm left the trailer but had fortunately stopped by the time he got to the train station.

Over the weekend, we did some antique shopping at a couple places in downtown Nashville. One specializes in mostly mid-century to 1970’s items. It’s always fun to walk through.

We also did our laundry at a laundromat over the weekend so that we could catch up on our clothes washing since we don’t have sewer hookups at the campground. We did hitch the trailer up over the weekend and took it to the dump station and back to the site on Saturday morning. 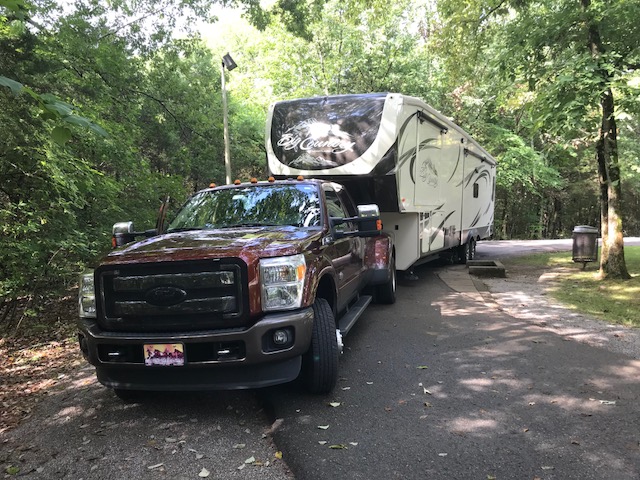 On the last workday, Malcolm left the office a little early and caught the first train out of town at 4:20 instead of 5:05, getting off at the first station where Val picked him up. We went out to dinner at a pizza place nearby before heading back to the trailer to start packing it up to leave. 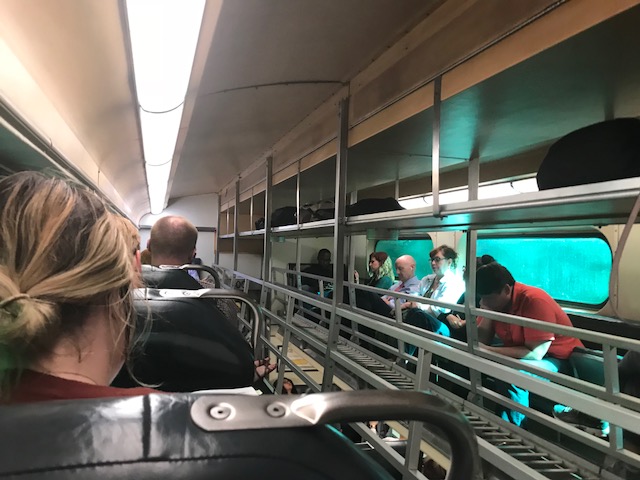 On Saturday morning, the 25th, we hitched up the trailer and dumped the tanks once again and headed from Nashville to northeast Kentucky, where Malcolm grew up.

We arrived at the KOA and set up the trailer on Saturday afternoon. 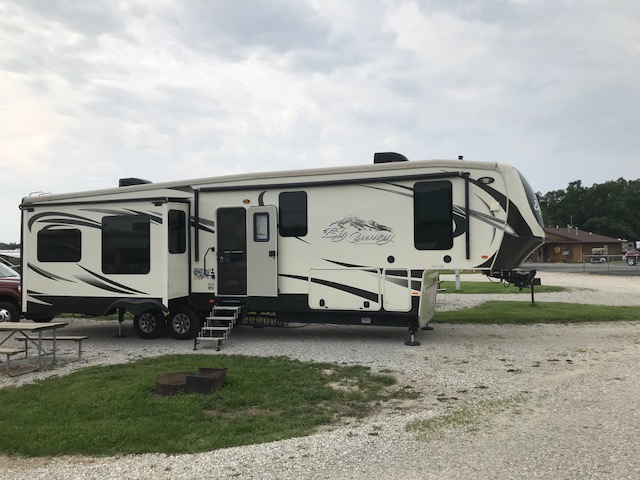 After relaxing a bit, we drove into Flatwoods, Kentucky and had dinner at the Giovanni’s Pizza restaurant where Malcolm often went when growing up in the area. They had the usual pizza buffet set up. We added side salads to our meal along with the restaurant’s special red salad dressing (very similar to a Catalina dressing).

On Sunday morning, we went to church with a couple of Malcolm’s classmates at Advance United Methodist church in Flatwoods. After church, Malcolm’s classmate Margaret King drove us over to the Chinese buffet for lunch. We had a great time visiting with Margaret and eating lunch.

We spent Sunday afternoon relaxing at the trailer. It was pretty hot outside and we just felt like sitting inside and doing nothing.

This morning (Monday), we drove out in Greenup County and visited the two covered bridges that are still standing. Both have been rebuilt to some extent over the years, but one is still in active use for light vehicles.

We also drove to the Greenup Locks and Dam on the Ohio River. You used to be able to take a tour of the locks and watch the barge traffic moving through, but you can only view it from the river bank now. We walked down to the bank and watched for a while, taking a few pictures.

Tugboat heading to the locks

We drove on into Ashland and had lunch at Panera Bread followed by a shopping trip to Joann Fabrics. From there, we drove around town for a bit then headed back out to the campground to change clothes for a dinner engagement. On the way, we stopped at Crisp’s Dairy Bar, a local favorite, and got some frozen treats.

We headed back into town and met several of Malcolm’s high school classmates (and a couple of their spouses) for dinner at Blazer’s restaurant in Ashland.

We had a great visit and a pretty good turnout. Malcolm’s classmates decided after the last high school reunion last year that it would be fun to get together on a more frequent basis, so they go out to dinner once a month now as well as some other special get-togethers.

We sat around and visited until about 9:00 when everyone started heading for home. We said our goodbyes and headed back out to the trailer to get ready for our trip tomorrow. We’re heading to North Carolina for the Labor Day weekend, with a stop tomorrow night in Wytheville, Virginia.