Hi. Long time, no see. Yes, it’s been over a month (closer to two) since we last updated the blog. Here’s a capsule summary of life since we left North Carolina just after Labor Day weekend. 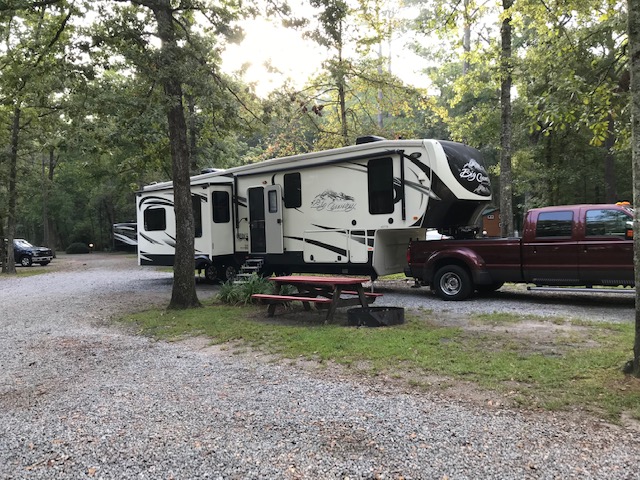 The next morning, we drove on down to Panama City, Florida, where our son lives.

We were initially going to try to park our trailer next to our son’s new house that he moved into in July. There is space next to it, but traversing the front yard with the various trees turned into quite the challenge. That, and it decided to start pouring rain just as we arrived. We finally gave up and parked at Rustic Sands RV Park in Mexico Beach, Florida (yes, that Mexico Beach – more on that in a while). 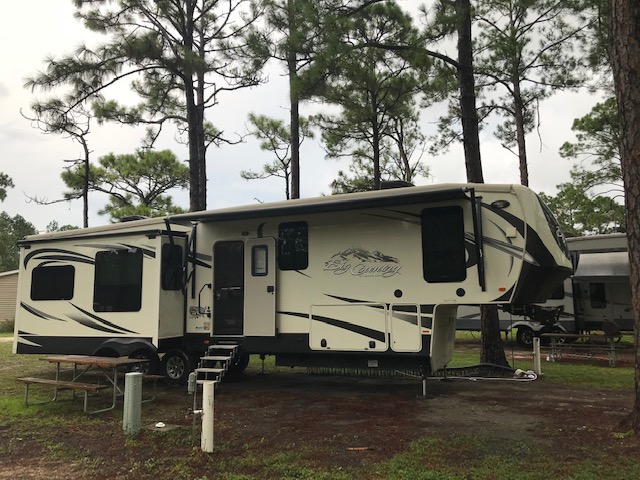 After getting the trailer set up, we headed back to David’s house. We went with him to PetSmart to pick up his new kitty that he adopted. Her name is Siren and she was about 9 months old. 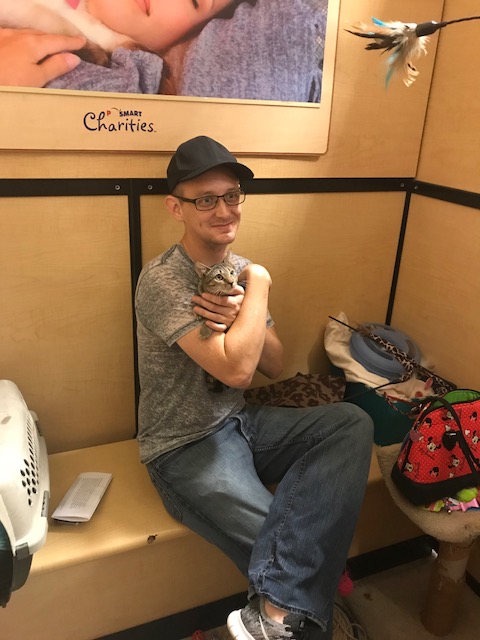 We got the grand tour of his new home and visited for a couple days before heading on towards our own home location.

Back at our own place, we settled in pretty quickly and started back in to the normal day-to-day non-travel activities that we do. Malcolm works most every weekday and Val works on various projects.

One project we weren’t prepared for, though, was having to gut and re-do the walls in our recently renovated guest house. It seems the air conditioner just blew all that humid air around in the back part of the house and mold started growing on the paneling (and on the underlying sheetrock).

Yes, we probably should have purchased a dehumidifier for the guest house, but didn’t and now we were going to pay the price. Malcolm took several days to fully tear down all the wall material in the back room (fortunately, the fully drywalled front room didn’t sustain any mold damage).

Back to bare walls

We found some nice shiplap boards at Lowe’s and ended up using that to re-do the walls. We wish we had done that in the first place as we could tell right away that it was going to looks much better than cheap paneling. 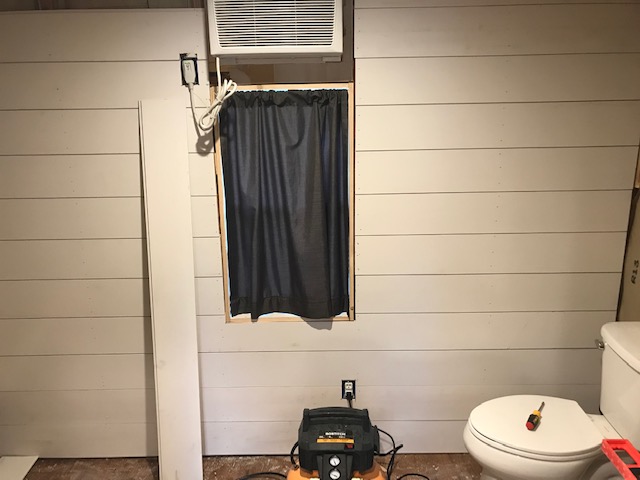 We put shiplap on all four walls and the ceiling and trimmed out the corners, baseboards and edges. The bathroom side shows how well it came out.

We painted the walls a light gray color and left the trim white. We think it looks great. Oh, and yes, we now have a dehumidifier in the room. The first 24 hours it was in the room, it pulled about 8 gallons of water out of the air! It has since been plumbed to expel the water outside through a hose.

Aside from rebuilding our remodeled area, there were no other major things to take care of after we got back. Typical activities such as trimming all the palm trees and pressure washing all the concrete (a downside of living near busy US 27 is all the black dirt/soot/tire dust that collects on everything).

We took a “vacation day” on October 4th and stayed for one night in a room at Disney’s Saratoga Springs Resort. We managed to find the room available on the same day we went to Mickey’s Not So Scary Halloween Party.

We went swimming for a while, then relaxed in our room until it was time to put on our costumes (yes, adults get to dress up for Halloween at Disney).

Val Relaxing in the Room

We headed over to Magic Kingdom in our costumes and enjoyed a fun evening trick-or-treating (we brought back a huge sack of candy), riding a couple rides and just enjoying the evening.

Malcolm as Goofy (and Bullseye as Pegasus) 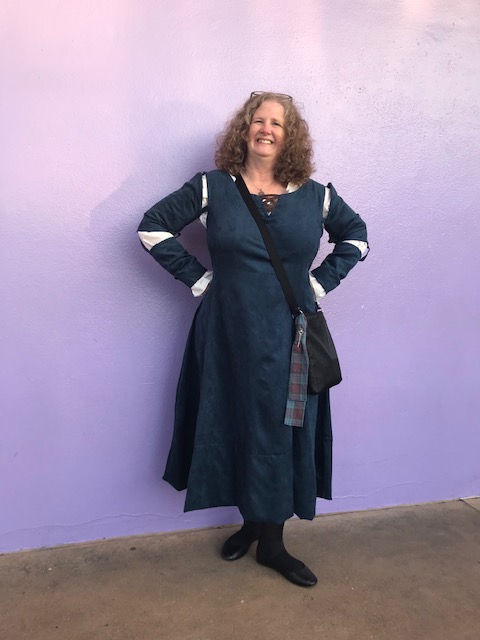 Val as Merida (from the movie “Brave”)

Other “excitement” this month was hurricane Michael. While the only effects we got in the Orlando area was a breezy, rainy day, our son had a more direct exposure. He lives near Tyndall Air Force Base (where he is stationed) and was ordered to evacuate the area by the Tuesday before the storm hit his area.

David and his roommates boarded up windows and doors at his house and they all headed north to the Montgomery, Alabama area to wait out the evacuation order. Literally today, a week and a half after the hurricane hit, David was allowed to travel back to town to check on his house. He was very fortunate. 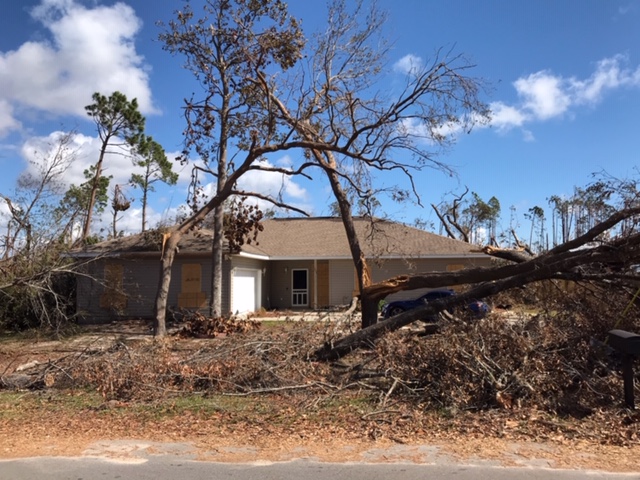 There are trees down everywhere. A couple fell against the side of his house and slightly onto the roof, but just the tops of the trees. It doesn’t appear the roof was damaged by the trees at all.

David’s back yard was previously heavily shaded by a lot of tall pine trees. As you can see in the photo, above, they are mostly all blown down. Fortunately, the largest tree that fell near the house fell in the back yard. 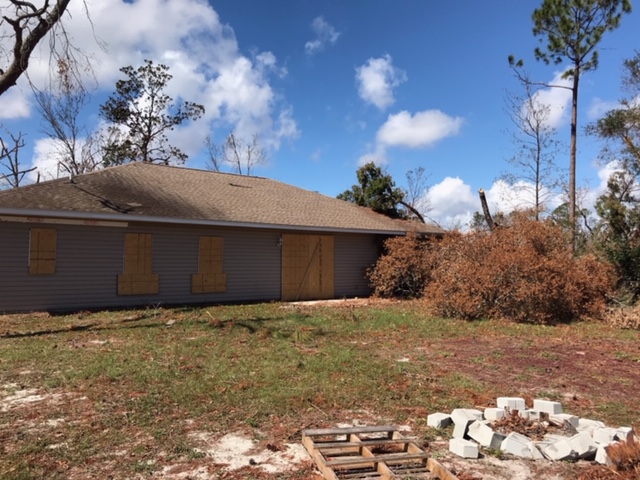 The trees on the house were pretty light. Most of David’s damage will be the trim and panels under the eaves. He walked around inside his house and didn’t note any water marks on the ceiling. He also stuck his head up inside the attic area and couldn’t really see much there, either. All in all, he came out pretty well.

As soon as power is restored to his area, he and his roommates will move back in and start the cleanup process. Water is already running, cell service is good (he FaceTimed with us from his house earlier today) and he even had some mail delivered a couple days ago (an Amazon order).

We’ll still plan on having Thanksgiving dinner at his house unless anything changes from the storm.