With a new year came new laziness in updating our blog (you probably noticed). We’ve been in Florida the entire time, or at least the RV has. Well, you’ll see below. There will be a lot of pictures and some accompanying text just to catch you up.

We installed our countertop dishwasher in a more permanent fashion in the trailer. We cut a hole through the kitchen wall and used a difficult-to-reach bathroom cabinet to contain the dishwasher. It just fit in the space. Malcolm had to move one shelf up a couple inches in the top bathroom cabinet. 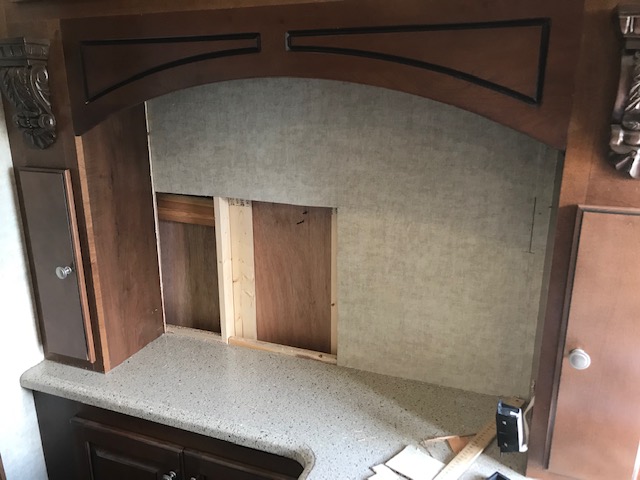 We took out some of the decorative woodwork around the opening in the kitchen and put a shelf above the dishwasher. That more than made up for the slight loss of counter space in front of the dishwasher.

With everything trimmed up, we’re happy with the results. We’ve been using the dishwasher quite regularly since (and using less paper plates and bowls).

In mid-January, Malcolm flew out to Houston for a week for work. It was a pretty non-descript trip. The hotel was nice and served a hot breakfast, and on most evenings, a hot dinner. United Airlines is the primary airline flying direct from Orlando to Houston. Malcolm said he liked it OK, but the seats were a little more cramped than Delta or Alaska airlines, so he upgraded his seat coming back home.

At the end of January, we pulled the trailer the 15 miles to Disney’s Fort Wilderness for our annual camping trip there (our first trip in 2013 was to Fort Wilderness and it has since become a tradition). 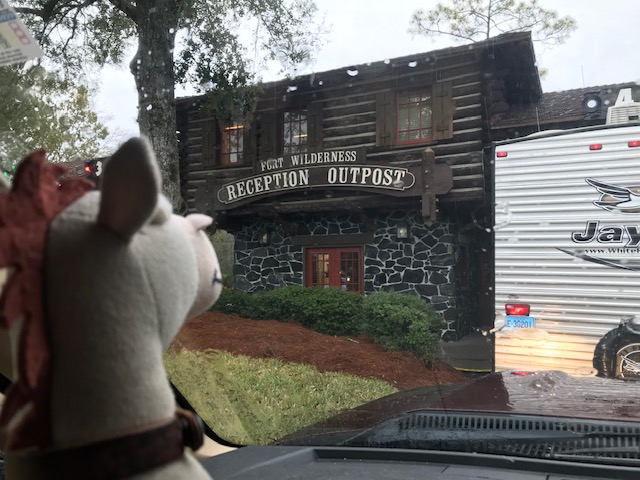 Our buddy Bullseye is excited to be checking in

David came down and joined us for the majority of the trip. He left his kitties home with his roommates. We visited Disney parks a couple days.

We also took a trip to Busch Gardens in Tampa one day. David got all of us free tickets with his military pass. 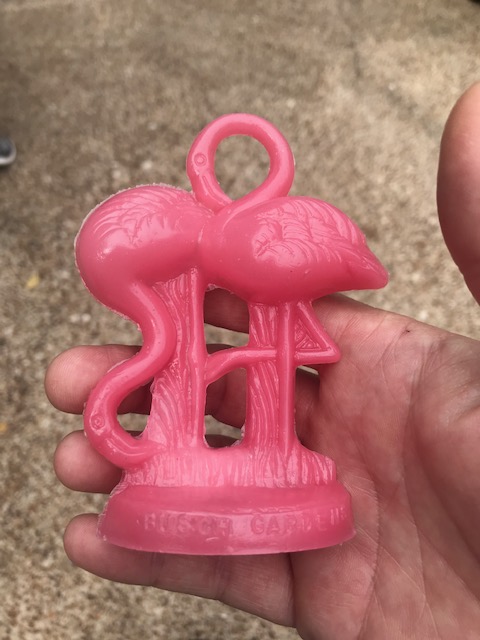 Malcolm went horseback riding at Fort Wilderness while we were there – another tradition. (Val can’t ride anymore due to knee issues). 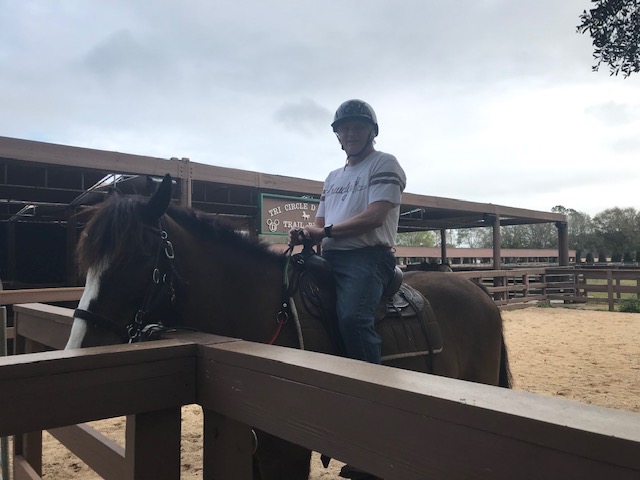 We took advantage of our Disney Vacation Club privileges to view the Magic Kingdom fireworks from the top floor outdoor balcony at Bay Lake Tower (next to the Contemporary lodge). It tried to sprinkle rain on us, but we braved the chilly drizzle to see the fireworks from a fun vantage point.

We also took advantage of our Disney Vacation Club privileges and attended the Moonlight Magic event at Magic Kingdom. At these events, the park closes to the general public around 8:00 PM but stays open until midnight for Disney Vacation Club members that reserved admission ahead of time. The entire evening is free and they even fed us dinner. There was also all the Mickey ice cream bars you could eat. Not to mention, all the rides were open with the longest wait at 10 minutes.

We both entered chili in a chili cook-off at our neighborhood club house. Neither of us won but all the chili was good.

The theme was Western Night. As you can see, there were very few cowboys and cowgirls there. Malcolm wore his entire outfit, complete with hat and boots. If they had a costume contest, he probably would have won. 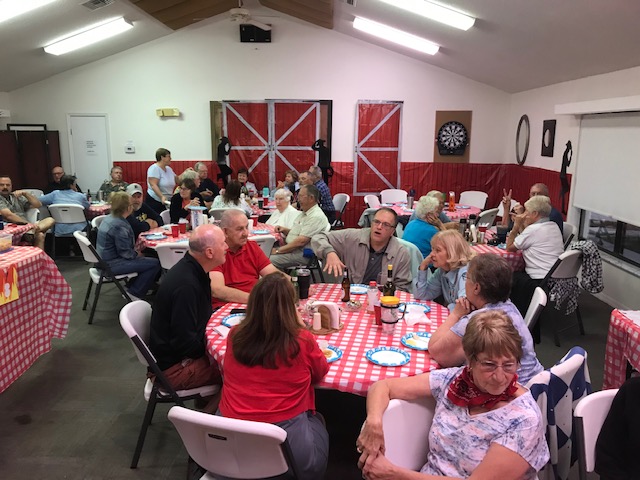 Malcolm had a second trip to Houston at the end of February to complete the project he traveled there in January for. He was happy to find that Hertz had a Ford pickup truck for rent. As a Hertz Gold member, Malcolm gets to pick out any vehicle in the Gold parking lot at Houston airport, so we picked something familiar.

Right after Malcolm got back from Houston, some friends of ours who attended church with us in Alabama were in town with some of their family. We met up with them all one day and visited both Hollywood Studios and Animal Kingdom. It was a whirlwind day, but we all had fun and it was great seeing the Huffmans again.

We celebrated our 33rd wedding anniversary on March 8th by staying at Disney’s Animal Kingdom Lodge for two nights. We had a savanna view room. There were wild animals outside our balcony. It was fun seeing all the different animals just steps away from our room (all the rooms are at least 15 feet above ground level). 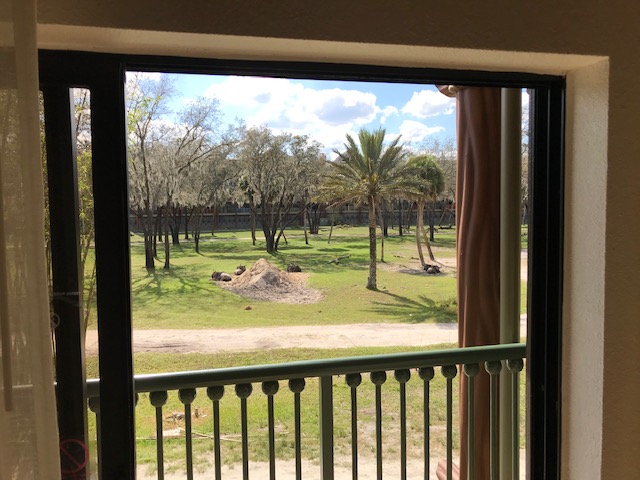 Wildebeest Outside Our Room

Malcolm took his good camera setup with him and had a great time photographing a lot of the wildlife around the facility. He posted quite a few pictures in his gallery here: [LINK].

The Thursday after our anniversary trip, we headed up to stay at David’s house in Panama City, Florida. He was graduating from ACS and was officially becoming a Staff Sergeant (ranking up from Senior Airman). He asked if we would “pin on his stripes” and we, of course, said “yes!”

Some of the Graduates (David 2nd from left)

There was a nice presentation ceremony. They typically do a complete banquet, but this class was much smaller due to displacement of many of the troops after hurricane Michael severely damaged David’s Air Force base (Tyndall). Instead, it was a short ceremony with certificates handed out and a couple of the higher-ups speaking.

After the ceremony, we pinned on David’s stripes while one of his roommates took our picture for us.

Other than those events, we’ve pretty much settled into a routine here. Yes, we are still going to be traveling and continue to live in our fifth wheel RV on our lot here in Florida. Most of our trips this year will be shorter “staycations” as seen in this post. Our only big trip this year is our annual trip out to Washington state this summer to visit the grandchildren and family.

Part of the decision to stay “close to home” for the most part is financial. Over the past few years, we’ve lived like tourists and now it is time to catch back up while Malcolm still has a good income. We’re back on a budget and working on paying off everything over the next couple years. All of this will help us later blend into a retirement income down the road.