Back to work for Malcolm this week. He’s enjoying having found a better route into town (coming in from the north to avoid various construction projects and inevitable downtown road closures around the Broadway area for various events. Val has been busy doing various little organizational projects as well as working on some sewing and crochet projects.

Speaking of projects and organization, we’ve also done a few small organizational mods. Most of them are repeats of ones we had done to the previous trailer. One is using large paint stirring sticks and cup hooks to make hangers for the various measuring cups and measuring spoons. The sticks are cut down to size and mounted on the back side (inside) of the pantry or cabinet doors. Cup hooks are screwed in and now you have a place to hang these items within reach. 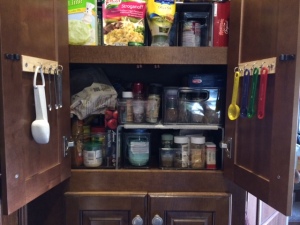 Measuring spoons in the pantry 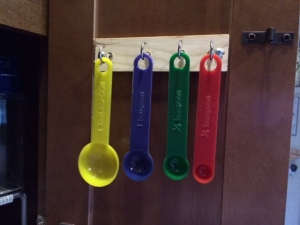 Another project Malcolm tackled was some way to organize the various stereo and computer components in the cabinet above the TV. Each time we travel, we find them all bunched up in disarray. Plus, most of these components generate heat and were stacked right on top of each other – not good for heat dissipation.

We looked and shopped around for some type of shelving or rack type system to mount items on where they weren’t stacked right on top of each other. We finally found a solution at The Container Store – wire type letter trays in the office department. Wiring is run out the open sides (the bottom and back have wire mesh). The computer (bottom shelf), Apple TV and Blu-Ray player (middle shelf) just sit on their respective shelves. We will evaluate if we need to secure them better after our next move.

The home theater component (top) was about 1/4″ too wide to fit inside one of the trays, but perfectly fit between the raised tabs on the sides that are used to interlock with a tray stacked on top. We used a couple pieces of velcro to hold it in place on top, then another piece to secure the wireless router on top of that. 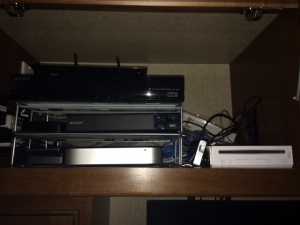 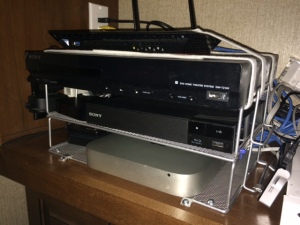 Close-up of the rack

Not really a mod, but more of a necessity. We found birds flitting around the front of our trailer, flying in and out. We found that they had started a nest inside the pin box on the front of the trailer. After debating several methods of preventing the nests, we decided on a low tech solution for now since we’ll be stationary for about 4 more weeks. Some blue painters tape and a large lawn and leaf bag covered the whole assembly rather nicely. 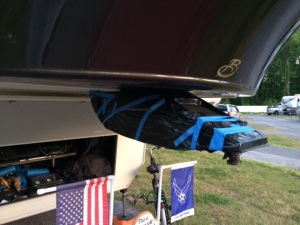 Not the prettiest, but it works.

Yesterday, Malcolm completed a modification started the night before – moving the light switch in the half bath to the wall just inside the door. With that complete, we also finished the smart tile backsplash in the bathroom. Pictures at the bottom of the post.

Malcolm’s brother David, his wife Marsha and daughter Jazzlyn came over in the afternoon to get the tour of the trailer, then we all went out to eat dinner at Frisch’s. They went on to church for choir and children’s programs and we headed back to the trailer.

Today, we headed just a short drive up the road to Georgetown. Once we had the trailer set up, we loaded up stuff we had been carrying up here for Val’s sister Anne and took it over to her house. We visited with her for a bit, then ran a couple errands before coming back over to her house.

We all (Malcolm, Val, Anne, our nephew Jonathan and his girlfriend) went out to dinner just down the road from the campground. They all came over to take a tour of the trailer before heading back home.

The weather is calling for a freeze warning tonight (winter still hasn’t quite slipped completely away), so we unhooked our water line just to be safe. Should be warmer the rest of the weekend, though. 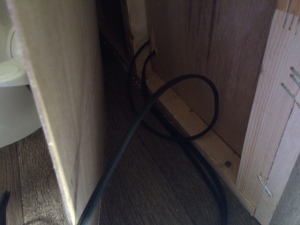 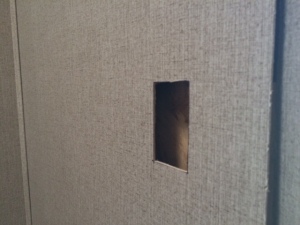 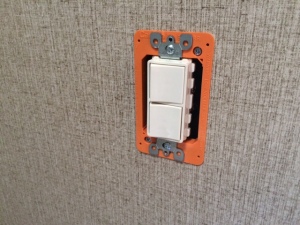 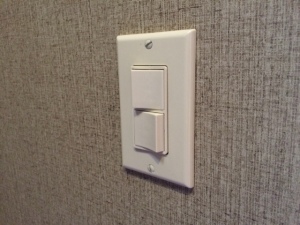 Cleaned up and working 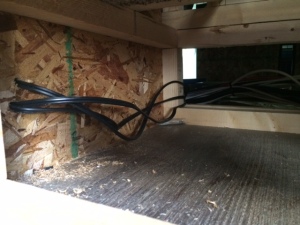 Wires run from under the steps 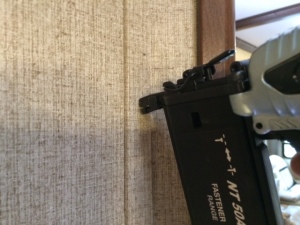 Tacking the wall and trim back in place 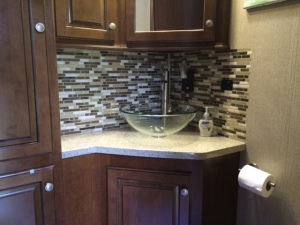 Backsplash finished (covering the switch holes in the process)

Malcolm’s half of our theater seating unit had broken right before we left Wetumpka. This morning while waiting for the hot water tank (that we forget to turn on yesterday) to heat up, Malcolm decided to disassemble the recliner and see what was broken. The whole seating unit is in three pieces (two seats and the center console) screwed down to two boards to hold it all together.

Malcolm removed just the one seat and took it apart on the floor. He determined where it was broken. The box section under the seat had pulled loose on one corner where they only use long staples to hold it together. He decided he would get some L-brackets at the hardware store later in the day and shore it up that way.

After showers, we headed to Cumberland Falls State Park where we had lunch at the lodge and drove down to the falls to get some pictures. Afterwards, we drove back to London and stopped by Lowe’s for hardware for the chair. While there, we found some of the Smart Tile peel-and-stick gel tiles that we liked and never got around to getting for our former trailer. We picked up a few packages and took them home with us. 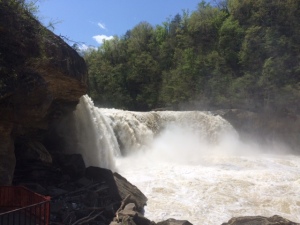 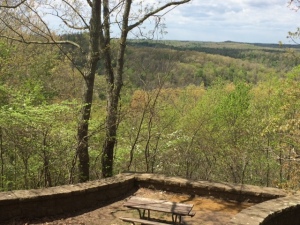 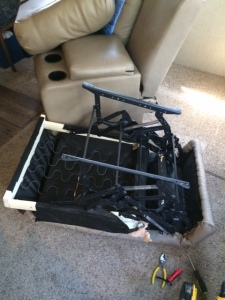 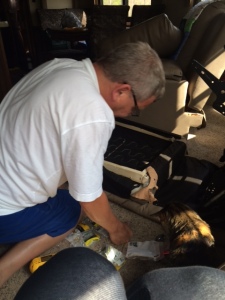 Malcolm and his assistant 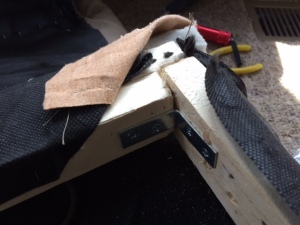 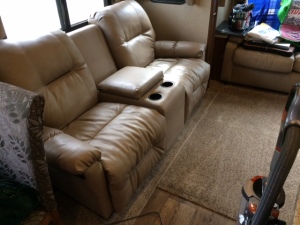 With the chair fixed, Malcolm moved on to the backsplash in the kitchen. He started on the right and worked right to left since the tiles overlap. 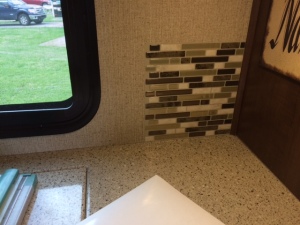 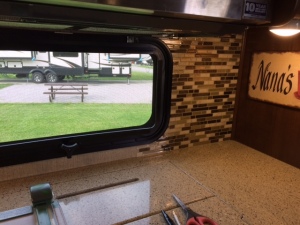 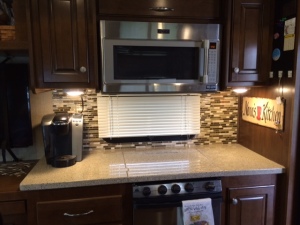 With the kitchen out of the way, Val could start cooking dinner. While she was doing that, Malcolm started on the bathroom backsplash, completing one of two walls. 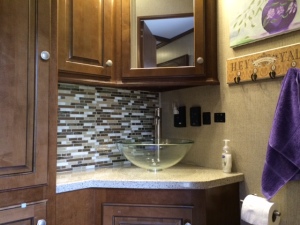 Once the wiring is done, Malcolm can finish putting up the backsplash and use it to cover the hole where the light switch used to be. He started on that project this evening with his brother’s assistance (David came over to visit for a while) but ran out of wire, so he closed everything up and will work on the remainder tomorrow.

Yesterday we decided to do one of the mods on our list – add adjustable shelves to the tall cabinets in the half bath. We purchased the side shelf rails and clips and a couple 10″ wide shelf boards. Malcolm knocked out the shelf in the middle section of the cabinet. 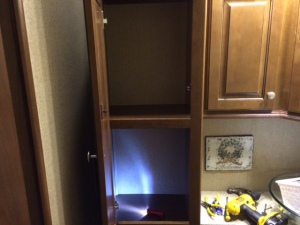 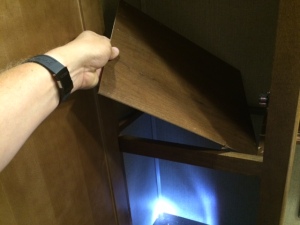 After removing the original shelf, the rails were attached on both sides after cutting them to length. 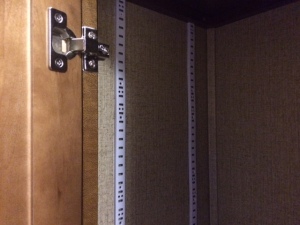 Malcolm cut the shelf boards to length and we decided where to put the shelves, installed the clips and shelves and put everything away. 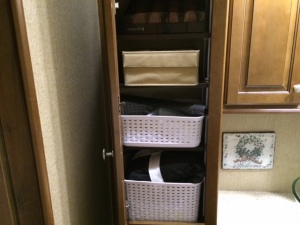 We did the same for the cabinet above this one, but we’ll need another shelf or two for it (the home improvement store ran out of shelves).

Today, Malcolm started the process of bringing a bunch of stuff from our storage unit to the trailer. These are things that we’ll be taking to Kentucky next week and dropping off with Malcolm’s brother and Val’s sister. In exchange, we’re putting a bunch of stuff from our trailer into the storage unit. Since we’ll be in Nashville after traveling through Kentucky, we’ll have to make a day trip back down here to get our normal trailer stuff back out of storage and put it back in the trailer.

Lowe’s called today, as well, to let us know that the Maytag convection microwave we ordered online had arrived. Malcolm went over after work and picked it up. He removed the original microwave and our next door neighbor came over to help Malcolm wrestle with the new unit. No in-progress pictures, but here’s what it looks like installed. 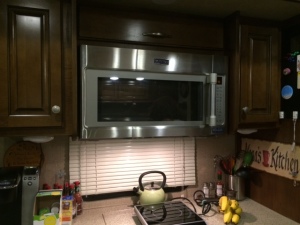 We headed down to Panama City Beach for a long weekend. There is an air show at the Air Force Base this weekend and we thought we’d head down to see that and to visit David, of course.

We packed up, hooked up and headed over to the dump station at Fort Toulouse around 8:00 am and emptied all the tanks. Then, we hit the road south. We stopped at Camping World in Dothan, Alabama and picked up a power fan vent cover and a second Dometic 320 toilet for the half bath.

We got one of the best sites here at Pineglen – a super long site at the end of two rows or normal sites. An extra bonus is that we have some semblance of a yard in front of our rig. 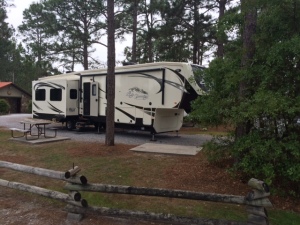 Once all set up, Malcolm headed over to Lowe’s to pick up some extra plumbing pieces so he could hook up the new toilet with a cutoff valve like we did with the other one. He got it all hooked up, turned the water on and everything’s fine. After the toilet install was complete, he climbed up on the roof to install the vent cover over our power fan. While he was installing the cover, David and one of his friends came over from the base.

After the fan cover was installed, we all headed out to get some dinner. We ended up at Carrabbas. After dinner, we stopped by the grocery store to pick up food for tomorrow. David and several of his friends are coming over to the trailer for dinner. We’re making up some traditional Kentucky fare – Hot Browns and Derby Pie.

Hopefully the weather will hold up for the air show this weekend. There are periodic thunderstorms forecast all day Saturday and on Sunday morning.