We took our time leaving this morning, as Val needed to stop by Michael’s Arts and Crafts to pick up some yarn for a project she’s working on as we travel. They opened at 9 am, so we planned our morning accordingly.

We stopped at Wawa to pick up some breakfast burritos and to top off the tank on the truck, then drove across the highway to Michael’s. Then it was on the road. 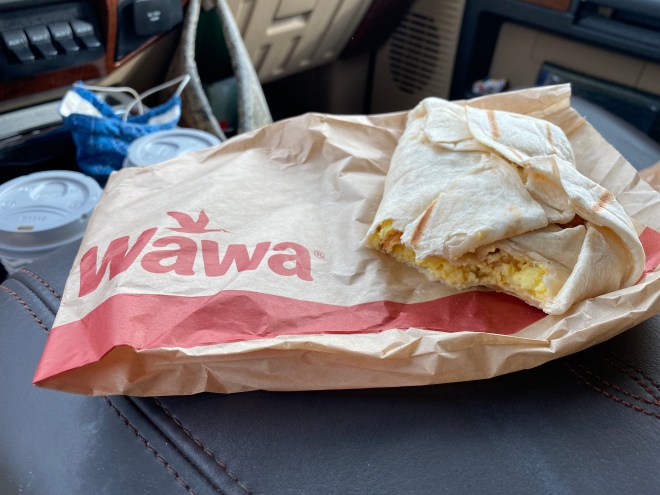 We headed up Florida 429 to the Florida Turnpike, then on to I-75. We stopped to fix lunch at a rest stop just south of Lake City, Florida.

We rolled into Panama City around 3:30 PM. We made a stop at Target as Malcolm needed a different pair of sunglasses. He had broken his favorite ones a couple weeks ago and had been wearing a cheap backup pair he bought at some point. Those glasses were really tight on his head and were giving him a headache. We also picked up a half-gallon of milk to put in the fridge.

On the way to our son’s house, Malcolm spotted a really low price on diesel and pulled into the Murphy Oil station at the WalMart to top off the tank. $2.039 is a really good price in Florida for diesel (we paid $2.359 at home on the way out of town). Turns out there was a little price war going on through that stretch of road.

We got to our son’s house not long after he left for his overnight shift at work for the Air Force. We’re staying in his guest room overnight and will see him when he gets home in the morning. Tomorrow’s trip is fairly short (about 3 hours), so we can hang around for a while in the morning and visit. 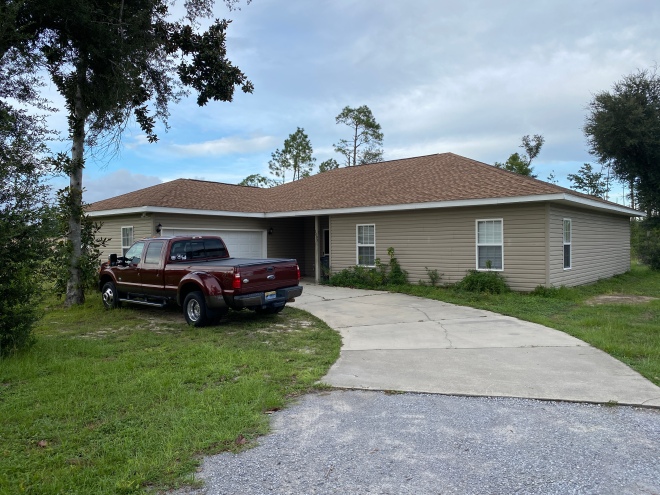 By the way, here’s what the bed of the truck looks like when the tent is collapsed. We found it is easy to just drop the tent with the mattress and luggage inside and pull the rolling bed cover closed. When we get to our destination and need the tent, we open the rolling cover and tailgate, set up the tent and it’s ready to sleep in. Takes all of about 5-7 minutes.

As referenced in our last post, we’re planning on traveling cross-country from Florida to Washington state to visit our grandchildren. We mentioned that we aren’t taking the RV nor are we flying. There are many reasons why we’ve chosen to travel as we are going to.

First, the RV roof needs a more permanent repair before I would feel comfortable taking it for a long, cross-country trip. So far, we haven’t been inclined to do that. We have taken the RV on a couple local camping trips this year – one to Fort Wilderness in February and another to the Cape Canaveral area on the east coast of Florida (more on those trips later).

We don’t feel comfortable flying cross-country during this pandemic, either. It doesn’t bother us wearing masks as we’ve been wearing them since they were first mentioned by the CDC early in the summer. Sitting in an enclosed aircraft for several hours just doesn’t sit well with either of us. Travel by train (a guess by one of our readers) would be another no for us right now.

That leaves driving cross-country. We first thought we could just hop in the car and stop at hotels along the way. Then we thought that since we have a lot of extra camp gear, maybe we could stop at KOAs and use their camping cabins. That thought evolved into our final selection for method of travel cross-country. Meet our new truck bed tent:

Val found this on Amazon after I had previously mentioned tents that mount on a rack at roof level on the truck (or her SUV). Not wanting to have to climb six feet up to a tent in the air, this tent fits the bill perfectly.

There is plenty of room in the bed for a full size air mattress, which we picked up off Amazon, as well. We also put a memory foam mattress topper on the mattress for additional comfort.

We’ve practiced taking the tent down and putting it back up. We can do either operation in 5-7 minutes. We only have to take the tent down far enough to fit in the bed so that we can close the tailgate and pull our rolling bed cover closed over top of the whole assembly. There’s plenty of room to pack our chairs, pillows, clothes and a few other items in or on the tent before we pull the cover closed.

To keep our food cold going down the road, we bought a 1000W inverter that Malcolm wired up in the truck to power a mid-sized “dorm” refrigerator we bought at Lowe’s. Malcolm built a platform for the refrigerator that bolts down to the seat frame. Remove four bolts and lift the refrigerator out of the truck. The seats will fold down just fine. 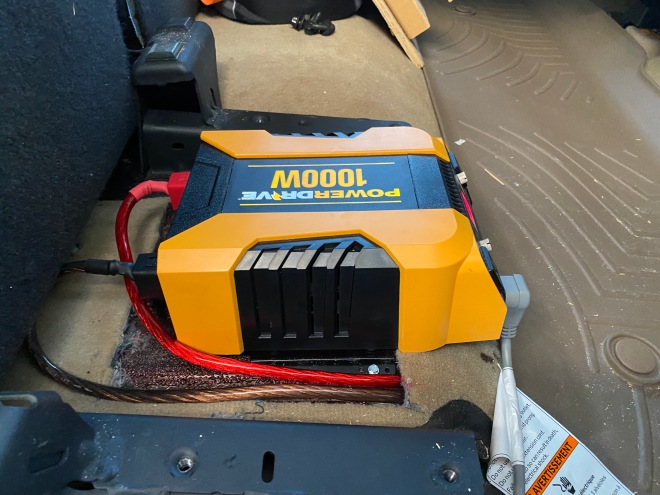 We rigged up a pool noodle to be able to slip over the top of the window on the rear passenger side door so we can run a power cord in the window when we stop at places that have electricity available. Otherwise, we’ll run the refrigerator on the inverter overnight.

We are just now testing that capability tonight. Malcolm will check the truck battery in the morning to see how it held up running the refrigerator for about 14 hours. The inverter indicates that the refrigerator only uses about 30W of power once running. We’re hoping that means minimal drain on the batteries overnight.

To test all this out, we initially were going to sleep overnight in the tent at home under the RV port. However, with low crowds at Disney’s campground, Malcolm was able to grab a two-night stay at Fort Wilderness over the past weekend. That would be a better test, as we are close to home and would let us see if we packed enough items to cook, sleep and otherwise make it through the night.

With few exceptions, it went great. We came home with a short list of “oops, we forgot this”. We had our popup screen porch with us, which was very handy for both shade and to keep the bugs down.

While at Fort Wilderness, we had a special visitor to our site. This juvenile barred owl (hoot owl) was hunting around the side of our site one evening. He was literally just feet from our pad. We saw him hunting around again the next evening and he was settling into the tree above our site the morning that we were leaving.

We’ve been spending this week packing, re-packing and paring down items to just what we need to get cross-country. Val has precooked or prepared ingredients for most of our meals along the way. We’ll keep breakfasts simple for ease of getting on the road each day. Lunches will be sandwiches along the way, as well.

We are leaving this Friday morning and plan to be in Washington state the following Friday evening. The first stop is our son’s home in Panama City, Florida. We’ll check in again once we get there.