The following review is for the GlowStep Revolution RV steps. Our particular model is the 27 1/2″ wide model with four steps. Torklift, the manufacturer, makes these steps in two widths – 25 1/2″ and 27 1/2″. You can order the steps with as few as two steps or as many as seven steps.

The step treads and step fold-out mechanism is made with aircraft grade aluminum with stainless steel hardware. The entire mechanism operates smoothly and has a very precision feel to it. There are no wobbly pressed metal pieces joined with rivets. The step frame and mechanism are very sturdy looking pieces as well.

This section details our installation process and thoughts. We’ll update this review from time to time with long-term usage results. Note that Torklift offers a lifetime warranty on their step products.

Malcolm performed most of the installation on his own. On our trailer, there are two plastic splash panels mounted underneath that also serve to support the j-wrap near the step opening. These were removed and the screws retained for re-use.

With the splash panel removed, the four bolts that held the old steps in place were loosened. Carriage bolts were used with a nut on the other side, making nut removal a bit easier.

The old steps were also supported at the bottom on a couple of metal flanges welded to the frame. Two self-tapping screws were removed from the flanges so that the old steps could be lowered down and away from the trailer. 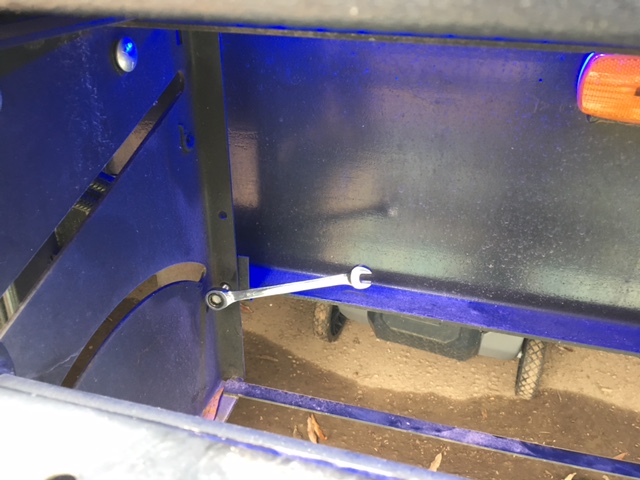 The box that the new steps were shipped in was just the right height to use as a platform to lower the old steps down while removing the bolts. Then, it was a simple matter of dragging the old steps away on top of the box. The box was re-used for helping hold the new step frame close to the installation point, as well.

With the old steps out of the way, it was time to install the new steps. Torklift recommends removing the step assembly from the frame to make mounting the frame an easier task, and it was. Wrestling an entire 60 lb. assembly would be much harder to accomplish even with help. With just the 10-15 lb. frame to deal with, it was a fairly simple matter of installing it with only one person.

With the frame installed, it was time to test the mechanism since it is a fairly tight fit in the opening. We found that the mechanism was hitting the j-wrap on the left side of the steps. We cut a bit of the j-wrap away with a pair of side cutters. (In the following photo, the cuts had not yet been cleaned up and look pretty jagged).

Our son, David, was already in town and stopped by to help his Dad lift the steps into place and re-attach them to the frame and mechanism. Once all back together, we found that the steps would not stow back in the frame like they were supposed to. Malcolm discovered that he put the bolts and nuts in backwards when attaching the step frame to the trailer mounts. He and David fixed those by removing them one at a time and re-inserting the correct direction.

With everything back together, it was time to test out the new steps. They stowed away no problem with the mounting bolts in the correct orientation.

When extended, the steps reach all the way to the ground. There are three positions at the top where the steps can be locked into place that can be used to move the assembly up or down to account for slope away from or toward the trailer. We put ours on the middle position since the ground near the trailer is only a couple inches lower than the pad.

To help level the steps front to back, there are two adjustable legs at the corners of the bottom step that have five different lockable positions for each leg. This lets you level up the steps as well as account for potentially uneven terrain at the bottom.

We practiced stowing and deploying the steps a couple times and it is really easy and straightforward. Walking up and down the steps is really nice, since the bottom step is resting on the ground and not hanging in mid-air like most RV steps. The legs on the bottom step can remain extended when the steps are stowed for travel.